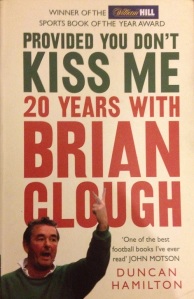 A stunning, no punches pulled personal account of the best manager England never had.

Duncan Hamilton’s proximity to his subject, as sports writer for the Nottingham Evening Post throughout the tenure of Forest’s most successful manager, might have led this book to being a one-sided revelry in the glare of Clough’s brightly burning star. Instead, what we are presented with is an epic, yet personal, portrayal of an unyielding, caring, gruesome and generous ogre of a man, one whom many will feel they knew, but never in such high resolution. Hamilton takes us from his stammering first meeting with Ole Big ‘Ead, via European Cup success, gallons upon gallons of whisky and vodka, explosive flamboyance and stubborn determination, all the way to slow and painful demise of one of the most successful coaches of the twentieth century.

We are brought into the fortress of the manager’s office, as Hamilton tells us of Clough’s vice-like grip on the Midlands club, and how his demonic determination to prove every “bloody shithouse” wrong who ever doubted him, spurred him to create, dismantle and build anew this small provincial team, into a team capable of competing in the upper echelons of the European and domestic games.

As well as the author’s idolisation of Clough which is, on occasion, somewhat too prevalent throughout the book, Hamilton’s championing of Peter Taylor and the demand for recognition of Clough’s long-term partner in crime, screams from the pages that these two men undeniably changed the author’s life, and football in this country in a manner only a handful of coaches could lay claim to.

An outstanding biography of the man in the green jumper, showing the braggadocio we have become accustomed to from the appearances with Muhammed Ali and Don Revie, as well as the unseen side of the Middlesbrough-born man, his insecurities which fuelled his alcoholism and the self-doubt which plagued his career, spurring him to the most successful period of Nottingham Forest’s career.